Go! is the third CD by Manson'd Brazilian jazz group O Som Do Jazz and features all original compositions is a variety of styles including samba, Bossa Nova, MPB & Baiao.

This DVD is a compilation of live performances from the Helios Jazz Orchestra (directed by David Manson) and features singers Lori Hafer, Bryan Hughes & Whitney James.

A Kiss For Rio - O Som Do Jazz

A Kiss For Rio by Brazilian group O Som Do Jazz, features 9 original compositions by Manson.

Infinita Bossa is the first recording by his Brazilian group O Som Do Jazz and includes Bossa Nova and MPB standards, along with Manson' original "Sea & Salt".

Visions is a compilation of selected performances from the EMIT series in St. Petersburg, Florida. More than half of the CD was recorded in the Salvador Dali Museum. The music ranges from experimental to electronic ambient to free jazz with the world's leading innovative artists.

Fluid Motion serves both as a reminder of the presence of a lion in our midst and a promise of brilliant things to come from Manson and Powell. But it is the beautiful way that it all comes together that earns my vote for jazz record of the year." - Duck Baker, JazzTimes 1/03

"Rivers shows a fellow composer's respect for the material, paying tribute to its virtues with probing lines. Powell - almost as much as the compositions - calls those Booker Little sessions to mind with his crackling, slashing blowing. Combine that with drummer Anthony Cole's unrelenting kicks and Doug Mathews' firm massaging of the harmonic spine of the tunes, and you have a session that should not be missed." - David Dupont, Cadence 1/03

"On a new recording by trombonist-composer David Manson, Fluid Motion, I heard, for the first time, 20-year old trumpeter Jonathan Powell. Powell's crackling range and electricity of his imagination reminded me of the first time that I heard Lee Morgan and Clifford Brown. I didn't think of Jonathan Powell as a category. His voice is his own, as is that of the always-contemporary 79-year old Sam Rivers, on the same date." - Nat Hentoff, JazzTimes, 4/03

"At times, the band purveys a 60s style "Blue Note Records," sound! But, the thrust of this outing is founded upon bouncy rhythmic structures to coincide with the artists' expressive unison choruses. They delve into the free zone on "Crossdrift" - where Powell's corpulent tone and lyrically charged soloing supplements a few jagged, bop motifs. Here and throughout, the musicians' outwardly, magnetic camaraderie provides much of the magic. Consequently, the title Fluid Motion, denotes just one of the many notable attributes witnessed on this incontestably superb effort! (Zealously recommended...)" - Glenn Astarita, AllAboutJazz 11/2002

"In a just world, this self-produced album might be heralded as a mini-classic, or at the very least, as simply a splendid debut. For once, the superlatives are deserved, and with any luck, this one should herald the emergence of an exciting new talent and an important new band." - Steven Loewy

"Expanding Rivers' trio concept into a quintet has provided even greater fullness and diversity... Although the uptempo cuts are freewheeling and the soloists stretch out for extended sojourns, the concept of time has not been abandoned. The pulsating beat underpins the music, allowing it to breathe openly with a slight hint of structure. Regardless of billing, any chance to hear Rivers is a worthy endeavor, and this performance only reinforces why that is so. Manson and Powell play with decided ease with Rivers' group, making the set a true delight." - Frank Rubolino, One Final Note

"Two Questions: Who are these guys? And what are they doing with Sam Rivers? Sorry for the New York-centric approach, but pressing the play button on this disc by Fluid Motion had me scrambling for the lineup. This quintet comes out kicking ass and I hadn't taken in any names. Except, of course for Sam Rivers, the seventy-something saxophonist, a pillar in the 1960's avant- movement and New York loft scene of the 70s. Maybe that's why this disc shocks. Rivers is the big name in this quintet, but he isn't the focus. Trombonist David Manson is, in that the quintet is playing all of his compositions. The band has drummer Anthony Cole and bassist Doug Mathews, two musicians familiar with Rivers from those RivBea Orchestra records and a hip trio session from 1996, Concept (RivBea). Manson adds trumpeter Jonathan Powell and there is something special happening here." - Mark Corroto, AllAboutJazz 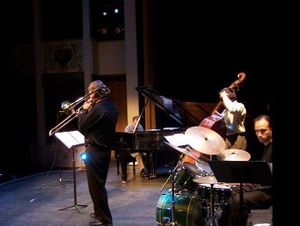 David Manson is available for clinics in a variety of topics including:


Pro Tools for the Composer

Trombone Through the Ages... a look at the instrument and repertoire from a historical perspective

Making Your Way in Music... skills you need to survive in the business of music

The Real Bossa Nova... how the Brazilians created the most beautiful music on the planet

The Grant Game... how musicians can tap into grant resources

New Directions in Trombone... a look at innovative trombonists and composers

The Nonprofit Base... how directing a nonprofit corporation can provide security and opportunities for musicians

Tweaking Your Big Band... getting the best from your players